I’d been waiting for about 3 weeks for the moon to be high in the sky again at a reasonable hour after dark. Tonight was the night! I really hadn’t planned to spend as much time out there as I did so I never bothered to set up the AutoStar or align my scope. I just plopped it on the patio and manually pointed it.

The 11.5 day old waxing gibbous moon was insanely bright and brilliantly crisp. I hope one day I am able to more accurately capture things the way I see them in the eyepiece. But instead, this is what I got tonight.

As I said, I hadn’t set up the AutoStar so I wasn’t tracking so the pictures were a little more blurred than they probably could have been. I will say that even the best of them does not even come close to being representative of how I saw it with the naked eye. 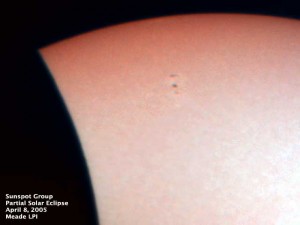 Well, if you want to call it that. After a half dozen nights out in the dark trying to work out an imaging procedure (with the scope, an iBook and a number of different video cameras), I finally captured a decent movie of Jupiter last night.

This image is a stack of about 8 frames, post-processed in photoshop. It was taken with the Meade Lunar Planetary Imager (LPI) 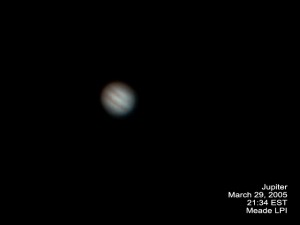 I can honestly tell you astrophotography is not a simple “point and shoot” exercise. I tried a Logitech QuickCam Pro 4000, an Apple iSight (with a hacked together homemade adapter, my Sony Camcorder (held to the eyepiece), an Olympus D-460 digitial still camera… and finally the LPI.

As with anything else I expect with practice (and more properly aligning my sight scope) it will get somewhat easier at any rate.

This evening I went out with the new Digi-T adapter I got for my Olympus D-460 digital still camera to try and my hand a Jupiter.

I found it extremely difficult to target thru the camera LCD as it was attached over the lense of the telescope. With a 2X Barlow on it was practically impossible. The motorized slewing of the scope seems sloppy at any speed and between 4X and 8X slewing speed it jumps from “too slow” to “too fast” IMHO. Also i’m going to chaulk some of the blame up to the fact that this was my first polar alignment with this scope and I was probably off a bit.

At any rate, the D-460 is pretty limited and without any manual control over the exposure time I pretty much got a whole lot of pictures of what appears to be an over-exposed, washed out star instead of the Jupiter I saw at the eyepiece.

So there’s nothing really to post as far as a reasonable image so I’m not going to bother. Suffice it to say though I did learn alot and I’m looking forward to next time.

I also expect my Meade Lunar Planetary Imager (LPI) to arrive any day now. It will be interesting to see if makes any difference.