If I were to ask you what the largest known volcano in the solar system was, you’d probably answer Olympus Mons on Mars correct? I’ve recently discovered this is not exactly true. Although Olympus Mons is indeed tallest known volcano (at about 27 km) it is not the largest by area. Fortunately we don’t have far to go to find the true king — in fact we don’t even need to leave Mars. A scant (on a cosmic scale) 1750 km to the northeast lies Alba Patera. 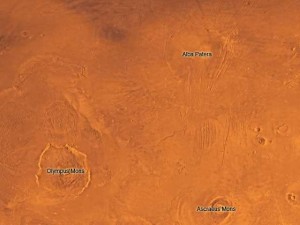 I “discovered” this feature while browsing Mars Orbiter Laser Altimeter (MOLA) data using JMARS (check it out — it’s very cool). I noticed a large caldera-like structure on a comparatively flat area of Mars. It looked to me like an Olympus Mons-type shield volcano that either never was, or had collapsed/slumped. Comparing the cratering of this feature to that of Olympus Mons led me to believe this was an older feature geologically. I immediately noted this “mystery volcano” covered a LOT more area than any of the Tharsis shields including Olympus Mons. At any rate it was armed with these suppositions that I began to search online for information about this feature.

Alba Patera (“patera” meaning “saucer” in Latin) has the largest diameter of any volcano in the solar system at over 1600 km (Olympus Mons is about 625 km across). Despite its size however, it is very flat — Alba Patera has a total height of only about 7 km. It lies directly north of the Tharsis bulge with it’s 100-km-diameter caldera right on 250ÂºE 40ÂºN. Most notably it is surrounded by a distinctive series of fractures oriented predominately north-south. Among these fractures are “chains” of crater-like features called collapse pits. In a volcanic enviroment collapse pits are formed when the roof of an evacuated lava tube collapses under its own weight. A great close-up of collapse pits from an area in the northeast region of the Alba Patera complex — taken by the Mars Odyssey Thermal Emission Imaging System (THEMIS) — can be seen here.

The following Terragen renders were done with bump and color maps obtained from Space-Graphics.com. Before overlaying the 3D render with the color map, I combined it with a grayscale MOLA image of the same region in order to enhance the surface detail. Although these renders aren’t as awe inspiring as Valles Marineris or as breathtaking as Planum Boreum, I learned many interesting facts about this region of Mars which had been — until this effort — unknown to me. 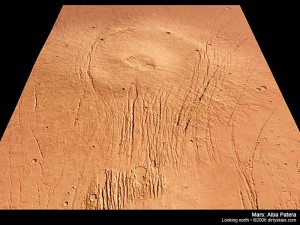 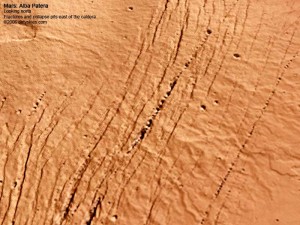 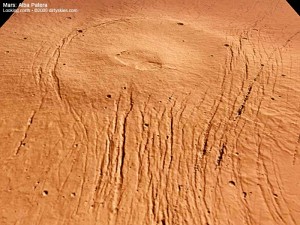 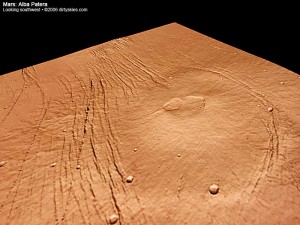 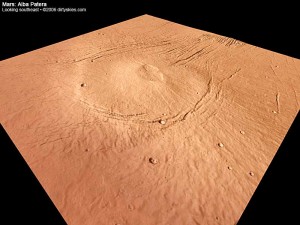 So the next time someone asks you about the largest volcano in the solar system, ask them if they mean “largest” or “tallest” — then set the record straight! 🙂