Welcome to Terragen Mars: Valles Marineris — the first installment of some visual explorations using Terragen for Mac OS X I hope to continue are time permits. Now on with the show!

Valles Marineris is a vast canyon system that runs along the Martian equator just east of the Tharsis region. As the largest canyon in the Solar System, it extends over 3,000 kilometers, spans as much as 600 kilometers across and is as much as 8 kilometers deep — 6 to 7 times deeper than the Grand Canyon. Spanning about 20 percent (1/5) of the circumference of the Mars, Valles Marineris is big enough to stretch across the entire continental United States.

The region was first discovered in 1971 by the spacecraft, Mariner 9. The first obiter to successfully reach Mars, it returned more than 7,329 images providing the first global mapping of the planet. After discovering the canyon system, mission scientists decided to name it after this spacecraftâ€¦ Valles Marineris (Valley of Mariner). The origin of the canyon remains unknown, however most researchers agree that it began as is a tectonic fissure in the Martian crust. Forming as the planet cooled and affected by the rising crust in the Tharsis region to the west, it was subsequently widened by erosion. Near the eastern flanks of the rift there appear to be some channels that may have been formed by water. 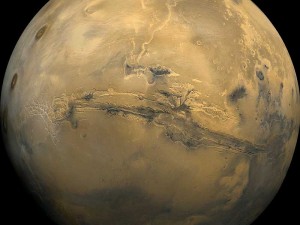 The above mosaic was created from 102 images of Mars taken by Viking orbiters in the 1970s. This view is similar to that which one would see from a spacecraft about 2,500 kilometers above the surface of the planet. Image Processing by Jody Swann/Tammy Becker/Alfred McEwen, using the PICS (Planetary Image Cartography System) image processing system developed at the U.S. Geological Survey in Flagstaff, Arizona.

Below are a number of renders I did of the central Valles Marineris region using Terragen. To calculate the surface topography I used a bump map of the surface of Mars obtained from Space-Graphics.com and overlaid the render with a shaded color image of the same area. The altitude of the camera was approximated by considering the scale of the image combined with the known maximum and minimum heights of the topography.

All of my renders here are vertically stretched by 133% to enhance the â€œmajestyâ€ of the region and should only be used for â€œgee whizâ€ purposes. Although, after examining the completed renders (with the exaggerated heights) it seems to me as if there may have been some type of liquid shaping of the entire region north the canyonâ€¦ particularly in the second render from the NNW. 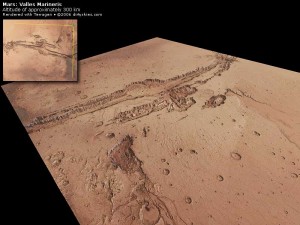 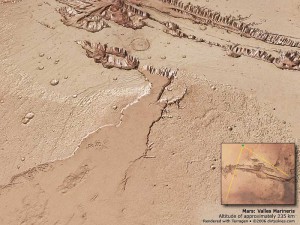 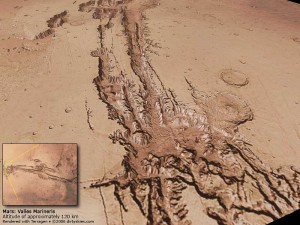 Lastly, I created a Quicktime VR scene of the area from a position approximately 120 km above Melas Chasma â€“ the large central area of the Valles Marineris canyon system.

Enjoy! Any requests on where we explore next?

Ah the skies are clearing here and hopefully Iâ€™ll get the scope back outside in the next day or two.