Planum Boreum (North Plain) is the name of the area at the north pole of Mars. At about 1,200 km across, the martian polar cap is cut by canyons and troughs that dive as deep as 1 km beneath the surface. The largest of which is the Chasma Boreale (Northern Canyon) which nearly bisects the north polar cap by a third.

The ice cap contains layers of both light and dark material in a spiral pattern which is commonly agreed to be carved by wind and the evaporation of ices. During the Martian winter, the spiral polar cap bulks up with carbon dioxide ice, only to sublimate during the summer period exposing the plain and fairly permanent water-ice cap underneath. Elevation data from the Mars Observer Laser Altimeter (MOLA) instrument shows that large areas of the ice cap are quite smooth, with variations in elevation of only a meter or two over many kilometers.

The renders I have done were built from two main data sources, topographical data and an image overlay. The topography was generated from a bump map obtained at Space-Graphics.com based on MOLA data. My initial plan was to synthetically recreate the surface colors and I think I made a valiant attempt… 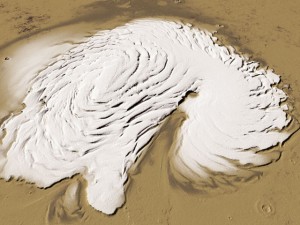 Since the application of color in Terragen is primarily governed by altitude (min & max) and slope (min & max), I was unable to get the results I wanted. So it was back to the drawing board. Over the next few days I was poking around Mars images online and I came across an image of the north pole taken by the Mars Global Surveyor with the Mars Orbiter Camera (MOC) — specifically MGS MOC Release No. MOC2-231, 22 May 2000. 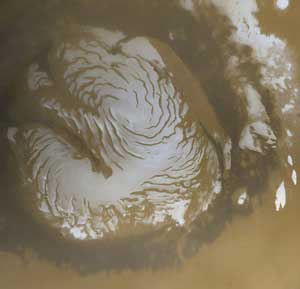 The MOC image covers the ice cap but it only partially covers region I am working with. So using a false-color image I generated from the grayscale bump map, I merged the two into this image covering the entire region. Although the topography remains accurate across this entire image, as you move away from the ice cap the coloration becomes synthesized. Not a bad trade-off though. 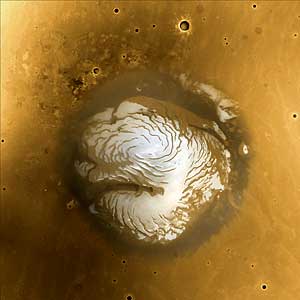 It was this image I overlaid onto the topography to achieve the results I was finally pleased with. Here is another render from a similar position and altitude as my first (poor) attempt. 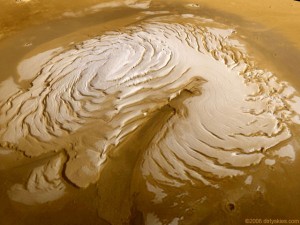 To be quite honest I was absolutely floored! It exceeded my wildest expectations. I hope you enjoy the rest of the views I rendered representing the Martian polar cap in early summer. The vertical relief has been doubled. 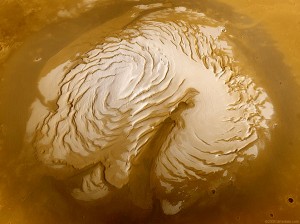 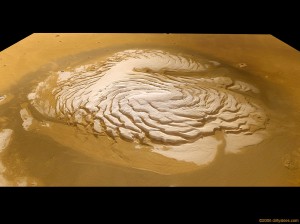 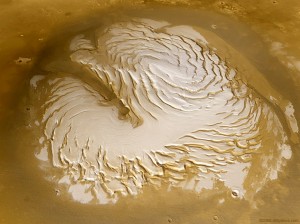 Last but not least, I give you the Martian north pole in Quicktime VR from an altitude of approximately 35-40 km.

Where do we go next?