Well last night was probably one of the final cool nights of the season. I took the scope out about 10:30 PM EST and the temperature was right around 60Â° F with a mild intermittent breeze. By the time I came in after midnight, was already in the high 50s. Apparently before morning the temperature reached 52Â° F, which set a local record for April 24. The last time it was this cold on this date was 1903.

At any rate, I worked exclusively with the Meade LPI tonight as there was a near fill moon, low humidity and a clear sky (at least when I started). I took about 20 shots of the Moon and Jupiter until some high cirrus clouds began to haze over the view. I still didn’t have the success I wanted but it’s definitely getting better (and easier… it took me over 30 minutes to get Jupiter centered in the view the first time I went out). I polar aligned the scope, slewed around to Jupiter, centered it in the eyepiece, popped on the camera and BAM! …there is was!

This is one of the first images I took. This is a stack of 11 frames. The area around the planet has been artificially contrast-enhanced to bring out the moons without over exposing the planet’s disk. 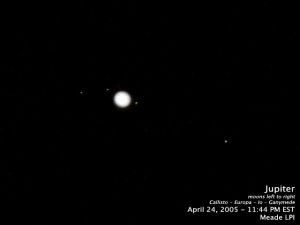 It was going so smooth at this point I decided to throw on the 2X Barlow lense and again… right on the money. Here are some shots from that configuration. 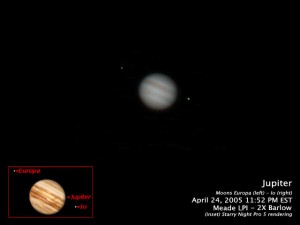 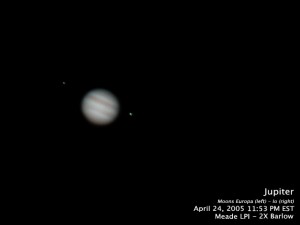 Again on these Barlow shots I artificially enhanced the contrast of the moons in order to bring them out a bit. I was also able to tease a little more light out of the planet in the second shot. In this shot you can actually make out the Great Red Spot in the lower left edge of the planet.

Lastly I turned my attention to the moon. These images are no where NEAR as bright, crisp and clear as the naked eye view thru the scope. I really need to get this figured out.

I have a bunch more I’ll try to process shortly but this one seems to have been the most distortion-free capture. The crappy thing about all this is that no matter where in the sky I am pointing, I am no more than 30-50 ft from looking over someone’s roof. So in all of these movies I took, the images wobbles — sometimes excessively — from thermal disruptions in the air over the rooftops.

Updated 04/27/05: It just occured to me that it should be noted that a 15.5 day old waxing gibbous Moon was about 33Â° to the east of Jupiter. It would be interesting to try this again on a dark night