Hurricane Wilma scraped by us to the south yesterday. The good news is it would seem I was just out of her reach. We got very little wind and rain to speak of. Yesterday afternoon after the storm had cleared, the sky became a cloudless blue and the temperature dropped 20 degrees into the 60s… amazing. With the low humidity, cool temperature and clear skies it was “scopin’ time!”

I hadn’t had the scope out since May 20th (according to the Autostar controller) so it took me a while to get set up and oriented. The one thing I REALLY noticed now is that my clock drive has ALOT of slop and my focus is jerky at very fine adjustments. Perhaps when I can afford it I’ll have the whole thing supercharged. This service is praised by the leading ETX expert Mike Weasner. At any rate, once I had my target centered, the scope tracked fairly well and it was almost 10 minutes before I started to notice any drift.

My initial intention was just to observe Mars and call it a night as I had gotten a late start. Even at 276X, Mars was a nearly featureless pale pink disk… rather unimpressive. So I broke out my iBook G4 and the Meade Lunar Planetary Imager (LPI) and did half a dozen runs at varying exposures. The processed results came out a bit better than I expected. 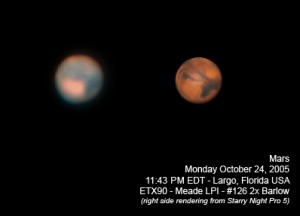 Even for nearly “ideal” viewing conditions locally, the was STILL alot of atmospheric turbulence. 🙁

2 thoughts on “‘Tis the Season”