I took the scope out last night in manual mode to shoot some portraits of the Moon. I took 49 shots in various configurations and camera settings as I was trying out the Canon Digital Rebel with the scope for the first time. I took many shots with the camera coupled to ScopeTronix 40mm ST Series PlÃ¶ssl but not one of them came out. I think the camera was so heavy that it was actually torqing the eyepiece in the tube and it caused all kinds of wierd warping of the image.

I then switched to prime focus configuration. If you aren’t familiar with this it’s where you attach the camera to the back of the scope’s optical tube assembly (OTA) which essentially turns my ETX90 into a 900mm telephoto lens!

I ended up with ONE perfectly framed shot that was reasonably in focus. 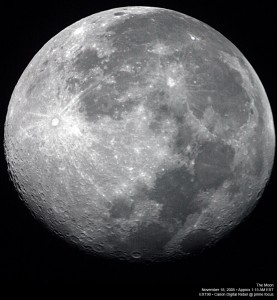 Unfortunately I under exposed the image so some grainyness was introduced when I digitally enhanced the light levels in photoshop. I only took about 10 shots in this configuration as it required me to be a contortionist in order to frame and focus the shots — the Moon was near zenith so the scope was basically pointing straight up (which negated the need for the counter-weight, for those of you who have been following that…project?) As it happens one of the items on my Christmas list is the Canon Angle Finder C which really would have went a LONG way in assisting me tonight as I was trying to get under this. 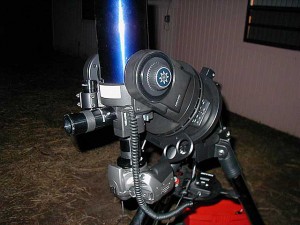 There was quite a bit of water vapor (and haze) in the air which was steadily increasing during the time I was outside. It wasn’t long before I began to notice a lunar halo much like the one I recently saw pictured over at Stuart’s Astronomy Blog. Here is my shot of this phenomenon. 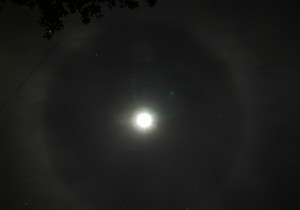 Lastly, probably the most interesting shot I took was of a prop plane that flew over. I was already focused on infinity so I swung the camera around and opened the shutter for about 5 seconds. 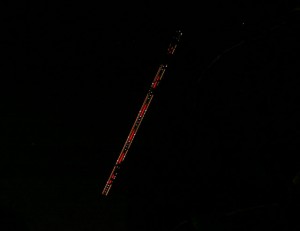