If you’ve been by here in the lastâ€¦ well since my last post, you may have wondered whether or not I was still updating here. Now you know! 🙂

In my area of Florida most of the summer months are hot, hazy, humid, and umâ€¦ hot. In addition to it being extremely uncomfortable to be outside fully clothed (mosquitos), I imagine it’s not good for optics to be soaking in the jungle air. Hence my dearth of entries.

What have I been doing?

We’ll I’m in the process of constructing a counter balance system for my telescope which will allow me to couple my (NEW!) Canon 300D Digital Rebel SLR camera to it without stripping the axis locks or straining the clock drive. I took it out one afternoon for some solar observing and my fork mount wouldn’t hold. I’m waiting on one more part then I will start fabricating in earnest. I aim to be ready for Mars in October! More on that when it happens.

I’ve also made plans to construct a Hartmann Mask using a similar technique to the linked example.

I’ve started putting together an image processing tutorial. I’m no expert by any means but I realize that I sometimes take for granted what I DO know (Thanks Tom!). I plan to start with some just some basic image correction techniques moving into the realm of more “subjective image interpretation” â€¦ as I’ve just named it.

Last, all the hoopla today regarding the Space Shuttle’s Return to Flight inspired me to dig deep into the archives to find a picture I remember taking back in February of 2001. This image of the vapor trail from the launch of STS-98 was taken from my front yard at approximately 7:40 pm ESTâ€¦ almost an hour and a half after liftoff. The sun had set locally but I could still see sunlight hitting the vapor trail in the upper atmosphere. I’m looking northeast here so that disk that appears to be the hazy sun is actually the over-exposed moon. 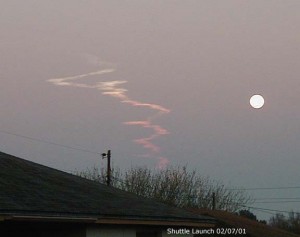 Unfortunately for me, the sky was too hazy to see today’s launch.