Just came across this site today. Apparently it’s been in operation since 2009, so it may be old news.

A new podcast every single day for those who can’t get enough. 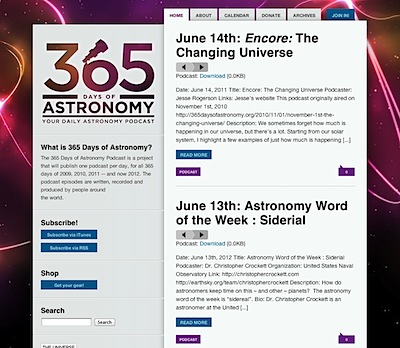 I received this email with a request to help spread the word. Sounds interesting!

This will be one of the better years for Perseids; the moon, which often interferes with the Perseids, will not be a problem this year. So I’m putting together something that’s never been done before: a spatial analysis of the Perseid meteor stream. We’ve had plenty of temporal analyses, but nobody has ever been able to get data over a wide area — because observations have always been localized to single observers. But what if we had hundreds or thousands of people all over North America and Europe observing Perseids and somebody collected and collated all their observations? This is crowd-sourcing applied to meteor astronomy. I’ve been working for some time on putting together just such a scheme. I’ve got a cute little Java applet that you can use on your laptop to record the times of fall of meteors you see, the spherical trig for analyzing the geometry (oh my aching head!) and a statistical scheme that I *think* will reveal the spatial patterns we’re most likely to see — IF such patterns exist. I’ve also got some web pages describing the whole shebang.

Crepuscular rays occur when objects such as mountain peaks or clouds partially shadow the sun’s rays. The name crepuscular means “relating to twilight” and these rays are observed at sunrise and sunset. Crepuscular rays appear to diverge outward from the setting sun, and are visible only when the atmosphere contains enough haze or dust particles so that sunlight in unshadowed areas can be scattered toward the observer.

The light rays are actually parallel, but appear to converge to the sun due to “perspective”, the same visual effect that makes parallel railroad tracks appear to converge in the distance. Crepuscular rays are often red or yellow in appearance because blue light from the sun is selectively scattered out of the beam by air molecules.

I live about 15 miles WSW of Tampa and crepuscular rays are a common occurrence. I suspect that what is causing them here are the buildings in downtown Tampa to the east in conjunction with the “flatness” of Florida. I’ve been observing them for years about 1/2 hour before sunrise and have never really considered them uncommon phenomena. It will be interesting over the next few days to see if they appear in the same configuration. If so then they are not caused by clouds… and CERTAINLY not by mountains. 😉

Over the years of neglect endured by my blog’s software engine (if it ain’t broke right?) somehow my blogroll and all my links stopped appearing on my site. Apparently my software was so out of date that the original db calls we no longer supported!

Anyhoo, I’ve rectified this and verified/updated all my links. I hope nobody thought I had just deleted them from my blogroll… no one even told me. 😛