It was about 65Âº F and breezy tonight with fast-moving intermittent clouds (low-level Cumulus?). I did about 10 runs with the camera, refocusing before each run. The reason I do this is because it’s close to impossible to tell if I’m in focus with Mars unless I can make out some surface details — which is close to impossible on my red-screened iBook using the Meade LPI imager. I had similar trouble with Jupiter earlier this year and I learned that by refocusing before every exposure I give myself the best chance of hitting one right on.

Here is the image from tonight’s optimum run. It’s a stack of 250 frames. 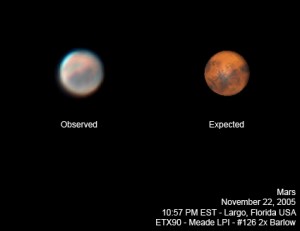 Notice the “tan” area in the upper left quarter of the image. I tried to find current information regarding dust storm activity on Mars but I was not able to — or I just didn’t look long enough. I would be interested in knowing if this is indeed a dust storm or just an artifact introduced somewhere along the line in my imaging/processing sequence.

They really fire the imagination!