I took the scope out tonight in manual mode — with the EOS300 Digital Rebel mounted at prime focus — to take some shots of the waxing gibbous Moon. The illumination was at about 84% so it was bright and the skies were about as good as they get. It was a chilly 64Âº F! 🙂

I was once again a little disappointed with the shots I got. I took a number of different exposures as usual and although some of them came out “OK” I really didn’t capture it. It always seems like I forget something until I get back in the house with everything put away. Tonight, in addition to the manual exposure settings I had wanted to take some shots at full autoâ€¦ the Moon nearly filled the frame so the camera would have probably handled the decisions better then I. Here was the best of the lot. 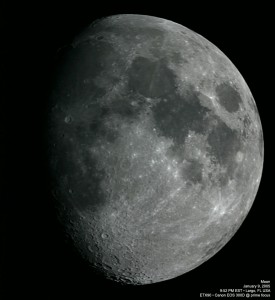 The upside to tonight’s excursion was that I had my 3 year old son out with me and he got his first look through the telescope. He was awfully impressed! You may be asking “How impressed can a 3 year old be with a telescope view?” Well, to kind of put things in perspective, “Moon” was one of the first words he learned after the requisite “Mama” and “D” (don’t ask me, that’s what he called me) and it was one of the first objects he identified for us “out of the blue” by pointing. He is also aware of what a telescope does, “it makes things look bigger” (thank you Dora).

I lifted him up to peer at the Moon through the 40mm eyepiece, “OOHHHH!! The Moon Daddyâ€¦ the Moon!” He then seemed to be inventing adjectives to describe it, “It’s so ??????, it’s VERY ??????.” Then he’d look up to the sky, back to the eyepiece, back to the sky again as if to verify his “findings” 😉 We then swung around to Saturn and I switched to the 9.7mm eyepiece. He evidently is “aware” of Saturn as well as he exclaimed “Y’ook Daddy, it’s the planet with the Goldie Ring!”

The final clue that he enjoyed himself came after we’d gone inside and put everything away. Every 5 minutes for the next half hour he would say “S’ank you Daddy I had a very good time.” My wife and I were floored! He’s NEVER said ANYTHING like that before. He couldn’t stop himself. He even had to repeatedly check to see if I had a good time too. “Did YOU have a good time Daddy? I had a good time.” It was too cute!

Seeing the light of the Moon illuminate his pupil the first time at the eyepieceâ€¦ listening to him fumble with his limited vocabulary trying to express himselfâ€¦ realizing that he is FAR more aware than he typically lets on. It was truly an unforgettable experience.