I was able to get out tonight and get a few shots of the Moon before a hazy cloud layer streamed in. The temperature was 63Âº F with 88% humidity so a felt a bit warmer then Monday night’s 64Âº. Of course my son in his “PJs” was at the back door “I need to come outâ€¦ I NEED to see the Moon!”

I cobbled together a temporary counterweight setup as I was getting SERIOUSLY worried about stripping the DEC axis of my telescope mount. The last two times I had the scope out with the Canon EOS 300D attached at prime focus I was seriously torquing the DEC clamp in order to hold the telescope in positionâ€¦ and then only barely. The camera assembly with the added right angle viewfinder adds 2.08 lbs to that end of the scope so it wants to pull the OTA back.

During the summer period — when the viewing here is at it’s worst and the jungle bugs are biting — I researched and ordered 2 of these counterweight sets from Astro Engineering (I mainly wanted the weights and the OTA screws and not the eyepiece mount) with the expectation of making something more permanent before this winter’s clearer skies arrivedâ€¦ I did not. So tonight I went into the garage and within 15 minutes emerged with these:

Clamped onto the dew shield they total 1.57 lbs. The telescope now holds in perfect balance with the DEC lock totally loosened. It will now pivot to any altitude and hold perfect balance without stressing the DEC lock in ANY way. I’m a happy camper! I will at some point fashion the design I originally had in mind which would allow me to easily add and/or remove weights in the dark. However in the interim, this works like a charm.

In turn the whole setup is now also stable against the camera’s shutter action, although I did STILL notice some wobble that needs to be addressed if I’m going to do exposures longer than fractions of a second. 🙁 But anyways as I started to say at the top of this post I was able to get a few shots before the clouds rolled in and nearly ALL of them came out better then the other evening. I’m still not quite “there” yet but I’m FAR more satisfied with the results I got against the effort I put in tonight. 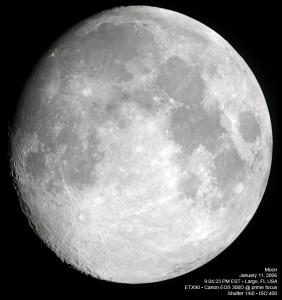 While I’m here I thought I would point you all to this post on Space Photos that shows a time-lapse sequence of Venus taken over many months as it swings around to pass between us and the Sun. I get a weird “inspirational-our-place-in-the-cosmos” kinda feeling watching it. It’s VERY cool!