I was getting ready for bed yesterday morning about 1 AM when I realized that sleep is overrated anyway. 🙂

I got set up in the yard by about 2 AM to try some runs with the LPI. It had been in the 50s for a few days now and I thought perhaps the atmosphere would have settled down a bit from Monday… I was wrong. It was still “wobbly” as ever. I managed to glean at least a few shots from the evening and then attached the Canon EOS 300D for the evening’s Moon portrait. After that I pointed at Saturn and took a number of different exposures in order to image both the planet and then to overexpose it in order to grab the large moons. I was successful. Enjoy.

Shots from the LPI:

Lesson learned tonight, take ridiculously long movies with the LPI. Each of the above stacks started off over 300 frames. After aligning and throwing out the blurry/distorted shots, I ended up with only a dozen or so frames each to stack! 🙁 I’m actually considering putting the LPI in the refrigerator for 30 minutes before I go out next time and see if I can’t reduce some of the noise.

Portrait of the Moon with the Canon EOS 300D: 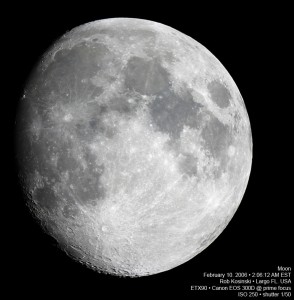 Saturn with the Canon EOS 300D: 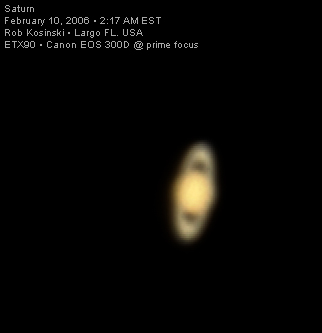 Lastly, if you haven’t seen this or been following the comments to this post over at Ian Musgrave’s Astroblog, have a look… there’s something kinda neat cooking.

Well folks, almost every night this week I’ve gotten no more than about 4 hours of sleep — and tonight I had the pleasure of sitting at a car dealership for 4 hours buying a new car (which actually IS a pleasure now that it’s over — as it’s my first “new” car in 18 years).