I was surfing the web this evening about a quarter to nine and I noticed the RSS feed to boyruageek had updated so I clicked over to this post. It awoke me from my glossy-eyed computer-induced lethargy and I realized I had intended (notice I didn’t say “planned”) to take the scope out tonight! So I set up for imaging with the Meade Lunar Planetary Imager (LPI) and took the scope out.

It was a beautiful 55Âº F and the atmosphere was fairly clear — about as still as it gets for me. I set the scope up in polar mode as it really seems to track better when only moving in one axis. I did a number of runs (which I’ve yet to process) and when I was done I thought to myself “well, while I’ve got it set upâ€¦” 🙂

I ran in and grabbed the Canon EOS 300D Digital Rebel and attached it at prime focus. This is the first time I’ve been able to try that camera at prime focus in polar alignment and I must say, I took some of the best shots of the Moon I’ve taken to date. I took about a dozen or so and they were all so comparatively good (for me) that I had a hard time picking out the best one to post. So without further adoâ€¦ 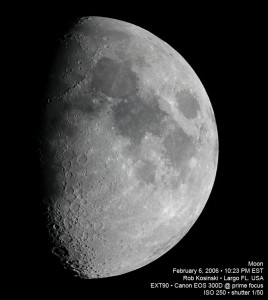 Then again I said “heck, while I’ve got it set up” I turned to Saturn which by now was nearly overhead. I took about a dozen shots of Saturn at varying exposure times. The last time I had the scope out in manual mode with the 300D, I noticed that in spite of the counterweights I was still getting a little wobble from the shutter motion. I had remembered reading somewhere about what someone called the “hat trick.” Basically he took his hat and covered the end of the scope while he engaged the shutter. After about 5 seconds when the telescope had stabilized he’d pull the hat aside and begin the exposure. Just before closing the shutter he’d block the tube again with his hat. I took 4 shots of Saturn using this method and these are the shots that came out sharp! Here is the best of the lot. You can just make out Titan off to the upper left. 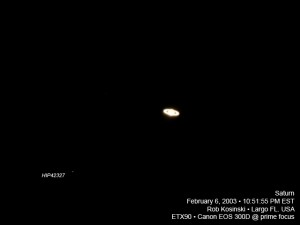 That shot was about a 8 second exposure with the tube blocked for the first 5 seconds and the last 1 second — so essentially the planet was imaged for 2 seconds. It was the shortest one I took and I wish I’d gone a little lower, but live and learn.

Upon closer examination of this image I noticed an even fainter smudge in my averted vision just beneath the planet. I confirmed this smudge in the other 3 good shots in order to rule out random noise. After checking with Starry Nightâ„¢ Pro I determined that this was Rhea. I took a screenshot of Saturn and its moon system from Starry Night and superimposed it over an enhanced blowup of my own image in order determine the orientation of the other main satellites. Lo and behold after doing this I discovered I’d also managed to catch Tethys well! 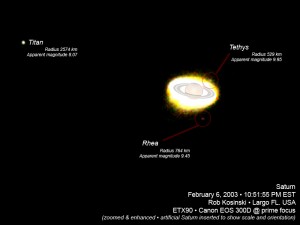 This shot was created by blowing up the first posted Saturn image to 400% in Photoshop CS2, bringing up the Levels dialog box, and then using the eyedropper on Titan to set it as my white point. After that all I did was attempt to minimize the noise created by cranking the light levels. Admittedly I processed it more than I had to.

I would not have picked out Tethys without the the Starry Night overlay bringing it to my attention. I love “discoveries!”

It really makes one appreciate all the inexpensive, modern tools we have at our disposal in this day and age. It’s simply astounding.

Tomorrow I hope to get a chance to see how tonight’s LPI runs came out. In the mean time, color me excited! It was a GREAT night at the scope for me personally. Thanks Matt, I almost didn’t even go out. I’m off to try and grab a few hours sleep before the kids get me up.

â€¦ dreaming of trying to image the Orion Nebula next time. 😉

2 thoughts on “While I’ve got it set up”