What looks initially like a Hubble photo or an exceptional ground based image of Jupiter was indeed taken from Mars! 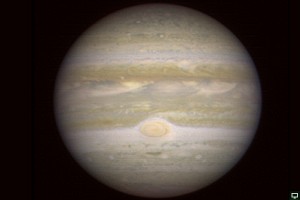 The martian astronomer responsible for this outstanding shot is actually not a native but a terran immigrant. The HiRISE camera aboard the Mars Reconnaissance Orbiter snapped this picture on January 11th while calibrating camera’s pointing and color response.

Original images and further details can be found here: HiRISE | Jupiter As Seen from Mars